Close proximity makes it more probable that you will, even if not intentionally, hurt the one you love.

My mom got Horsey from a second hand toy store. She fell in love with him because he was cute and cuddly in spite of being a wooden rocking horse. Horsey was supposed to be the in house toy for kids who come to visit.

Horsey had been living in our house for almost a year when I came. In the beginning I was afraid of him. He was bigger than me. He wasn’t afraid of anything. My dad used to cover him up with a blanket so I will not be afraid to venture into the living room – which was his territory.

After a while, I got used to him. I learned that he was passive, and didn’t mind being snapped at and bitten. The longer we were together, the bolder I became. In time I was not just biting him, but grabbing him by the neck and shaking him up, even when we were equal in height and weight. I would eat at his handles and rockers. I would hump him until he acknowledges that I am the Alpha Male.

He got dirty and ragged looking. He begun to lose not just skin, but also stuffing. When he begun to bleed too much, my dad had no choice but to declare him dead. And now I miss him.

My jaws and neck are stronger because of him. He taught me even things that initially evoke fear can be learned and mastered. He had been my companion and friend. 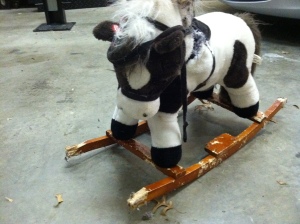 Life Lesson: I’m sorry is as powerful as Thank You.