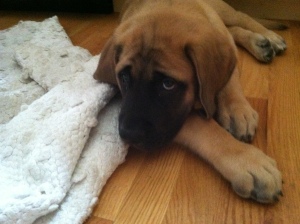 Let Me Go To Sleep!

As time passes, things change. New people enter your life, new things…. to put in your mouth. New toys, new food, new people to sniff. For these past few days I’ve gotten a lot of those.

It all started a few days ago, when my Mom brought some new faces home.There were five of them. One big lady with short hair, and a big smile on a pretty face who turned out  to be my Auntie. She became my new chew toy! One not-so-tall man with big black glasses, and a hairy upper-lip and chin would let me chase him around.  He’s really fun to play with! There were 2 other girls, about the same height as each other. One with a weird horse-tail, on her head! Just like the scary rocking horse beside the couch!! But… she’s really pretty! The other girl though was a lot skinnier than the first one, she also had nicer hair and smelled really good, also really pretty! The last one, well, I couldn’t really see him very well, hidden behind his big fortress of red pillows. But I know he’s a lot smaller than all of them, and a LOT cuter too. They’re all my cousins! From somewhere called Canada! (Jealous?) They were wary of me in the beginning, but before long everybody was petting me and playing with me.

Oh I hope they stay! Mom and Dad usually leave me home alone, and it’s kinda boring by myself. But, to my surprise, they stayed for a couple of days! Instead of a day of sleep, I got a day of running around, chewing stuff, playing. It was so much fun! I had so much fun that I would fall asleep right away. ( Jealous now?)

Having a lot of playmates and attention is great. But hey, I still need some private time for myself. And it feels kinda awkward, don’t you think? Suddenly having so much attention on you, getting petted all the time. I’m getting pampered! Who am I? Trouble?? (By the way, that’s the famous Leona Helmsley’s millionaire dog).

Life Lesson:  Cousins are one of God’s greatest gifts.  Cherish them.

Special Thanks to Louise M for guest blogging!

2 thoughts on “Too Much Attention!!”